Ten young Palestinian diplomats sharpened their media skills in Turin, Italy, as part of a program to prepare them for the rigors of public diplomacy and exposure to the world.

Abu-Fadil’s input began with concentrated sessions on how to think and act like a journalist.

That meant understanding the rapid and major changes media and journalists have to undergo as well as the added pressures Palestinians face on their home turf, where (among other things) mobility is regularly hampered by the Israeli occupation, and abroad, where they have to compete for attention with other pressing world issues.

The diplomats were also briefed on how newsrooms and journalists have to contend with a multimedia digital ecosystem as users of countless apps and social media often outpace traditional news outlets.

Abu-Fadil helped them define news, news values, the impact of information they disseminate, controversy, notoriety, sources, and how to write for different media, not just their superiors and other government officials.

A major part of one session was dedicated to media ethics and the trainees were told about verification and credibility of sources, notably in conflict zones, how to minimize the risk of misinforming audiences and how to mitigate the impact of hate speech.

Abu-Fadil and Siyam walked the diplomats through interview skills and how diplomats can improve their performance on the air, in print, and in online media.

That meant the proper planning and execution of the before, during, and after parts of interviews, and the subsequent assessment of one’s performance for improved future delivery of a message or project.

Simulations and mock interviews were part of the practical work in the workshop. Siyam was the interviewer and Abu-Fadil was the camerawoman/producer.

Other sessions involved writing skills, special focus on media in the Arab world, dealing with reputation issues, and social media for diplomacy.

Media Unlimited director Magda Abu-Fadil pulled all the stops to familiarize Libyan journalists with the concept of conflict-sensitive reporting aimed at producing a code of ethics for their country’s media.

The final event, a workshop grouping some of the participants from the second training and others who complemented the assemblage, focused on hammering out a code of ethics to be adopted by Libyan media.

UNESCO’s Division for Freedom of Information and Media Development in collaboration with the Tunis-based UNESCO Libya CI focal point commissioned the work that was conducted in Amman, Jordan in April 2016.

The event followed earlier efforts by UNESCO to establish a base for media ethics in Libya. The Amman program was co-funded by the U.S. Embassy in Tripoli.

The journalists came from Libya, Tunisia and Egypt to Jordan. Some of the participants were already in Amman, since they work for Libyan media based in the Jordanian capital. They represented print, broadcast and online media.

The program sought to change behavior and practice in Libya’s media sector. It drew on frameworks the journalists had established and adopted in the Madrid Declaration of July 2015 issued by Libyan media managers in talks facilitated by UNESCO in Spain.

Abu-Fadil and El Abasi with Libyan journalists in Amman

The journalists are expected to work with their peers, civil society, and local and national authorities to establish a national consensus on media practice, freedom of expression, and the role of the media in Libyan society.

The ax is falling fast on Lebanese journalists as word of newspapers going fully online or facing shutdown spread this week amid a sea of political, financial and social turmoil in the country.

Besides sharp drops in advertising revenue, competition from newer local print and online media (not to mention social media and citizen journalists), rising production costs, measly subscriptions, and readers who would rather get their news in snippets on the move, Lebanese media have also been heavily dependent on political patronage and outside funding over the decades.

All dailies have online versions but the big question is whether the paper editions would survive.

Newsrooms have failed to keep up with the times. There’s no real integration of key elements of digital multimedia newsgathering, editing, distribution and interactivity or engagement with consumers.

Editors and publishers exist in bubbles of denial or believe that imitating certain foreign media’s tactics of a race for clicks and unrealistic analytics will help achieve their goals of monetizing online content.

Other guests were Ahmad Zeineddine, a media professor at the state-run Lebanese University, as well as Salah Salam, editor of the daily Al Liwa’ (The Banner) and Rabih Haber, publisher of the online news site Lebanon Files.

Fish and Abu-Fadil reviewed and assessed the work of two groups of reporters, producers and editors for Egyptian print, broadcast and online media.

Egyptian journalists listen to comments about their work

The journalists’ output was an assignment finalizing training that followed up on earlier courses organized by BBC Media Action and that the journalists had undergone on news reporting and writing.

Jim Fish & Magda Abu-Fadil with Group I of Egyptian journalists

The September 2014 back-to-back workshops in Amman aimed at ascertaining the importance of proper and diverse sourcing, balance in presenting various sides to the reported information, ethical considerations, newsworthiness and accuracy.

The trainers also stressed the importance of the correct use of language, grammar, attention to translated material used in the journalists’ coverage, and making sure all information, notably numerical data, are presented in the proper context.

Fish and Abu-Fadil also provided pointers on how to improve radio, TV and online stories’ audio, visual and multimedia presentations.

The European Union-funded workshops are part of a program run by a BBC Media Action-led consortium covering 17 countries in the “European Neighbourhood.”

It was well timed in May 2014 with the forum’s theme, “Ethics of Digital Media and Online Knowledge Production.”

Abu-Fadil raised issues like misattribution of sources, manipulation of visual content and accepting gifts during a panel entitled “Online Media Freedom and Ethics.”

Abu-Fadil and El Helou at MSF14

She showed a report that was the top story on a Lebanese TV newscast of a woman committing suicide by jumping off a balcony while her husband filmed it on his mobile phone to jolt the forum’s audience and sensitize participating students to what is and isn’t acceptable.

Since videos and photos can easily be manipulated, Abu-Fadil made a point of demonstrating how Tungstène, the fake photo finder used by Agence France-Presse, and other software can detect inaccurate visual data.

The Verification Handbook was another excellent resource to which she referred. 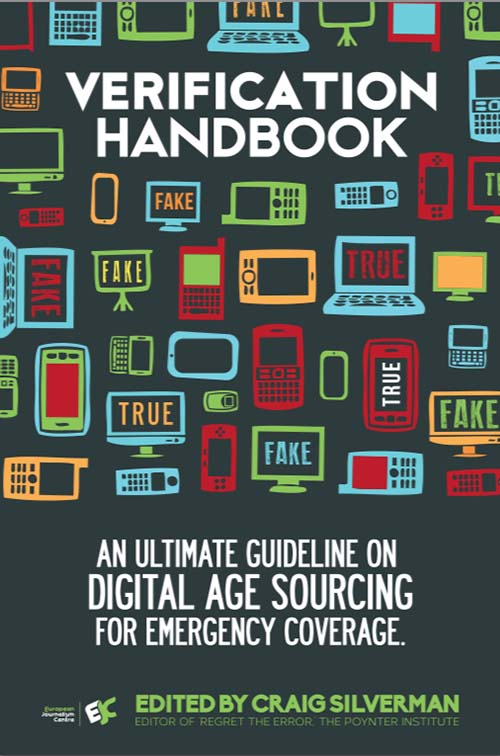 Abu-Fadil pointed to the dangers of “remixing,” what the code of best practice for fair use is, and what the School of Communication at her alma mater, American University in Washington, DC, did to explain it in a very handy video.

Arab journalists should differentiate between news and views and should not ignore context in their online and traditional outlet stories, said Media Unlimited director Magda Abu-Fadil.

She urged journalists to enroll in training workshops on a regular basis to upgrade and update their knowledge and skills and to fall back on critical thinking in their endeavors.

A [PDF] of the interview is available here. 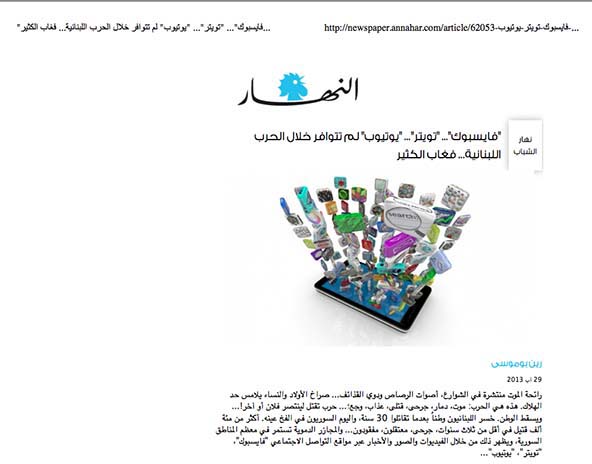 In another interview, with Lebanon’s daily Annahar, Abu-Fadil described how media disseminated news of the country’s 1975-90 civil war as opposed to the ubiquitous use of social media today that parallel and compete with legacy media in covering local and regional conflicts.

A [PDF] of the interview is available here.

Media Unlimited director Magda Abu-Fadil told participants at an Arab Media Forum (AMF) 2012 workshop that academics must get up to speed and not deride the importance of social media.

Some panelists and members of the audience said online media users could not be described as journalists since they don’t have the requisite academic and professional qualifications.

But, Abu-Fadil argued, many Arab journalism schools lacked resources and because of their poor curricula were turning out functional illiterates by not providing students with the knowledge base and skills for today’s exploding media market.

Additionally, faculty members were often below par and incapable of keeping up with the times, hence their aversion to digital advances, social media, and inability to incorporate them in their programs.

The workshop — which preceded the two-day event’s official opening — focused on whether social and online media users had become journalists by instinct.

Talk show host Zeina Yazigi (Twitter @zyazigi) of Dubai TV interviewed Abu-Fadil on her show “Al Shari’ Al Arabi” (The Arab Street) to discuss the impact of online and social media on Arabs in the wake of revolutions gripping the region and whether citizen journalists posed serious competition to traditional media.

Read details of the 11th Arab Media Forum organized by the Dubai Press Club May 8-9, 2012.